Bomb blasting and suicide attacks are continuous in KPK and now its turn for Bannu where a short while ago a bomb blast left 18 Pakistani security personnel martyred. Radio Pakistan in report tells on its website.
In Bannu‚ 18 security personnel were martyred and 25 others injured in a bomb explosion in Bannu cantonment area this morning (Sunday). 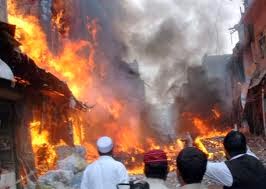 According to initial reports‚ the explosive had been fitted in a civilian vehicle hired by security forces. The explosion occurred when the convoy of security forces was set to leave for Miranshah.
The injured have been shifted to CMH Bannu.
President Mamnoon Hussain and Prime Minister Muhammad Nawaz Sharif have strongly condemned the Bannu blast and expressed grief and sorrow over the loss of precious lives.
In a message‚ the President said that such cowardly attacks can never weaken the resolve of our law-enforcing authorities and the nation to continue pursuing their struggle against the scourge of militancy and terrorism.
The President also called upon the concerned to ensure that best medical assistance is provided to the injured.
Interior Minister Chaudhry Nisar Ali Khan has also strongly condemned the attack on security personnel in Bannu.

He sought report from IG FC that why proper care was not taken while hiring private vehicles.


Interior Minister expressed sympathies with the family of those martyred in the attack.
KPK is rulled by PTI under the leadership of cricketer turned politician Imran khan and Pervaiz Khattak is the chief minister of the province.
Bannu is strong hold of Fazal Ur Rahman a well known religious politico leader heading its own fraction of  JUI.
at 1:37:00 PM