The chairman of Pakistan cricket Board PCB alleged that Pakistan was offered big four formula instead of big three to govern the world cricket affairs yet the administration under the ex chairman Zaka Ashraf refused and let the chance gone. 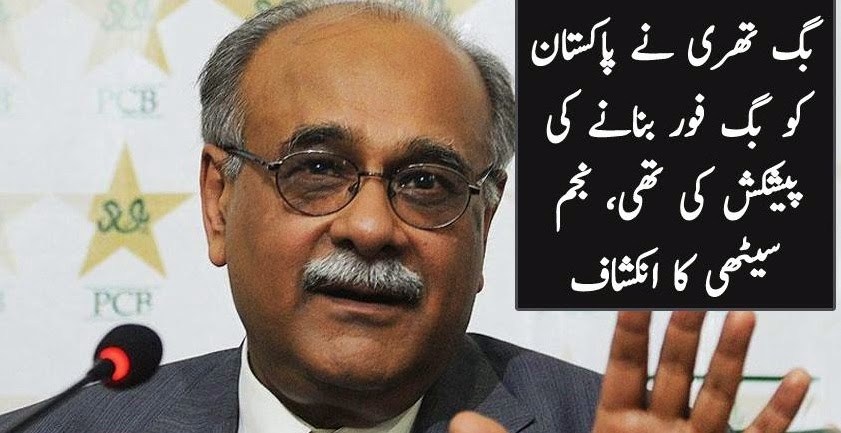 Express Tribune Pakistan reports 2 hours ago quoting Najim Sehti speaking to the media in Lahoor International air port after arrival from Dubai where he attended the ICC executive board meeting.
On February 8 this year ICC approved the most controversial structure for its governance which is called the big three comprising of India, Australia and England. It looks like the permanent members of UN who have the rights to veto any move placed or revert any decision taken. Sarcastically many of cricket lovers often found saying that India had a wish to become permanent member of UN whenever it knew that this dream can not be realized, the Indian tried to make it happened in cricket politics.

The Big Three in cricket after approval are considered the decisive position holders in the Cricket Governing organization ICC and it is feared by the countries out of Big Three that they would be neglected in decision making and the super powers of cricket would surely prefer to safeguard their own interests.

Regarding the Defeat against West Indies in T20 World Cup Najim Sehti told the reporters Muhammad Hafiz quitting the captaincy of T20 Cricket Team has set a good example and this attitude would help to improve the worsening condition of Cricket in the country.

Meanwhile to punish Pakistan for opposition of Big 3 no Pakistan Cricket Player has been included in the world T20 eleven though many of Pakistan players like Shahid Afridi, Saeed Ajmal, Umer Akmal and Muhmmad Hafiz are placed in the top 10 ranking in different departments of game. Here the shamefull bias is very clear that 3rd rated Indian and Bangla Players are given chance to play as part of World T20 side.