Not Fit For Print by Neha Ansari. Not fit for print is the Neha Ansari Article Published in FP.

Here is Neha Ansari Article published in FP (Foreign Policy) about Pakistan establishment intervention in politics and yellow journalism of some Pakistani media organizations in which she describes that Express tribune, Dunya and ARY TV were the main orgs to push forward the military agenda of destabilizing the democratic government of Nawaz Sharif through Imran khan of PTI and Tahir Ul Qadri of PAT. She left Express tribune after some time when some of the establishment men tried best to influence her for fake and exaggerated reporting to support PTI miscreants to ensure establishment stakes in the state affairs.
The complete report is here reproduced by Pashto Times for its viewers to tell the truth about the PTI loose character and their hidden agenda to destabilize the government for their vested interests and the report also prove the great Javid Hashmi stance when he left PTI for declaring it as a puppet. The article is titled Not fit for print. 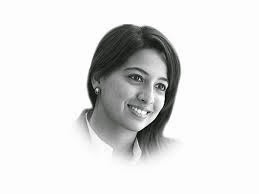 Neha Ansari worked as a senior sub-editor and shift-in-charge at the Express Tribune's national desk in Karachi, Pakistan from 2013 to 2014. She is now a visiting researcher at the Carnegie Endowment for International Peace in Washington, D.C.
at 9:35:00 AM