ICC have introduced its own free App for mobile phones for cricket lovers to follow Cricket World cup 2015. 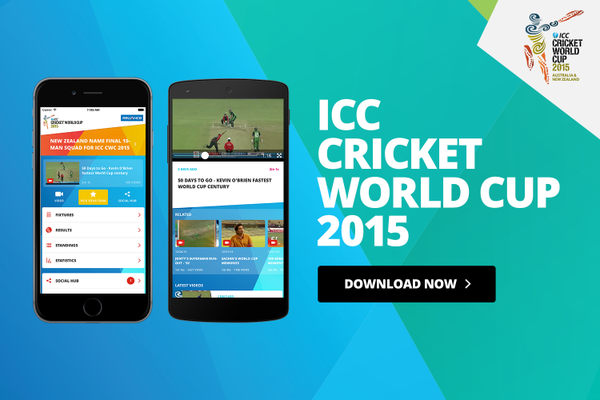 Viewers Of Pashto Times can download the app for Pakistan cricket updates with ease here by clicking the link.
Link to download.
Available to download now across Android and Apple platforms on both Mobile and Tablet devices

The ICC, in partnership with Reliance Communications, today launches the official ICC Cricket World Cup 2015 app - now available for free download from the App Store and Google Play. The ICC Cricket World Cup 2015, the 11th edition of cricket's flagship event, gets underway on 14th February and will see 14 of the best teams in the world compete for cricket’s top prize.

The 2015 edition of the ICC Cricket World Cup promises to be the biggest and best in the event's history. Whether fans are on the ground in Australia and New Zealand or anywhere around the world, anybody can get closer than ever before to the event by downloading the new ICC Cricket World Cup 2015 App for free direct to their smartphone or tablet.

The App will provide access to the new ICC Match Centre that will keep fans abreast of the live action with the fastest source of live scores and ball-by-ball commentary. It will also contain video highlights and the most important moments of the match that will ensure that those who haven’t caught the action live on television, will not miss out on anything. The video highlights will include all the dismissals, the magic moments, the big innings, the best dismissals and the post-match press conferences.


Fans will also be given a chance to pledge their support for their favourite ICC Cricket World Cup team within the app.

When they choose their side, they will be notified of the latest news and updates surrounding their team throughout the tournament. In addition, the App will list all the relevant tournament statistics, so that scores, the top of the charts in run-scorers and wicket-takers, are all within easy reach.

The App will also have details of all the fixtures and results. Viewers can read the reports that will be carried for every match and catch all the breaking news and any exclusive interviews that are conducted during the course of the tournament. There will also be interactive features of the app, where viewers can express their opinions through various polls that will sync with in-broadcast and get involved via the Social Hub section.

The app brought to You by Pashto Times, a Pashto Website for sports, poetry and literature with melodious pashto music.
Posted by RJ Samiullah Khatir
at 11:08:00 AM