Well done Pakistan.
The joint effort of United Services International Group Lahoor and Pakistan institute of Technology for minerals and advance Engineering have developed the Rickshaw which would consume solar energy rather than petrol. 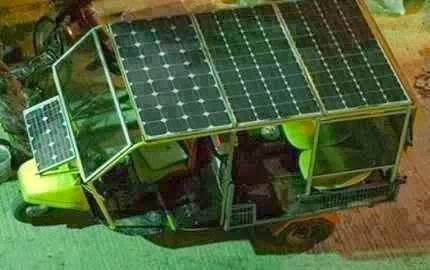 Here is the detailed copied report about the  progress in this regard for all viewers of Pashto Times.

The Senate was informed on Thursday that “Solar Auto Rickshaw” technology has successfully been developed indigenously to help overcome the acute shortage of energy and rising costs of fuel.
The Minister for Science and Technology Mir Changez Khan Jamali told the House in a written reply during question hour that M/s United Services International Group (USIG) of Lahore and Pakistan Institute of Technology for Minerals and Advance Engineering Materials Lahore had developed the technology through collaborative research.
He said the rickshaw was now ready for operations and would use solar energy instead of petrol or Compressed Natural Gas (CNG). He further said the cost of one solar auto rickshaw was about Rs 2, 30,000 which could be easily covered in one year, adding that its normal speed was 50 to 70 kilometres per hour.
The solar rickshaw operated on five solar panels along with five batteries and was driven by one Direct Current (DC) Motor.
Meanwhile the Minister of State for Production Khawaja Sheraz Mahmood told the house that Pakistan Steel suffered huge losses of about Rs 71 billion during the last four years. He said as per audit reports the losses occurred due to mismanagement in the purchase of raw material and higher freight rates, decrease in sales, high prices of imported raw material and low capacity utilization.
He further said the government had approved a bailout package for the revival and revitalization of mills. He said the Board of Directors of the mills approved the capacity utilization of 63% for the current financial year as against just 19 percent last year and 36 percent the year before.
The minister also said that public sector enterprises were run by Board of Directors and they should be summoned by the committee concerned to explain their position on losses incurred to the mill. On this, the chair referred the question by Abdul Haseeb Khan on the subject to the Standing Committee for consideration and asked for a report in this regard. Minister of State for National Food Security and Research Muhammad Moazzam Ali Khan Jatoi told the House that around 58 percent of the country’s population was food insecure.
He said a National Zero Hunger Programme had been prepared for approval by Prime Minister Raja Pervez Ashraf. He further said that the Internally Displaced Persons (IDPs) formed an integral part of the proposed National Zero Hunger Programme.
He also said that on the request of Khyber-Pakhtunkhwa (KPK) government and World Food Programme (WFP), the ministry had proposed that 50,000 tons of wheat out of PASSCO’s reserves should be donated to the WFP for IDPs. The cost of over Rs 1.5 billion would be handled by the federal government.
at 3:51:00 PM