The history of Pathans in Australia 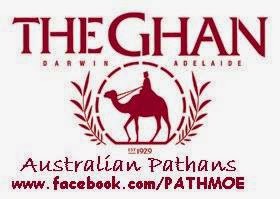 The first Pathans(Ghans) arrived in Melbourne(Australia) in June 1860, when 8 men arrived with a shipment of 24 camels for the Burke and Wills expedition. Camels were the primary means of bulk transport in the outback (where the climate was too harsh for horses and other beasts of burden) prior to the widespread adoption of motor vehicles. A large population of Australian feral camels remains from this time. Even though the Pathan's help was greatly appreciated they also were badly treated with racism because of their religion, looks, and competition against traditional transport workers. The train from Adelaide to Darwin is known as The Ghan in memory of the Pathans.
Reported by Pashto Times Via Pathans are the hottest men on the earth.
at 11:55:00 PM